MyHazards is a tool for the general public to discover hazards in their area (earthquake, flood, fire, and tsunami) and to learn steps to reduce personal risk. Users can enter an address, city, zip code, or a map location. The map enables users to zoom and scroll to their desired view and presents information on the risks identified within the search radius, along with recommended actions. If the tool above is not loading, click here.

An earthquake is the sudden, rapid shaking of the earth, caused by the breaking and shifting of subterranean rock as it releases strain that has accumulated over a long time. Initial mild shaking may strengthen and become extremely violent within seconds. Additional earthquakes, called aftershocks, may occur for hours, days, or even months. Most are smaller than the initial earthquake but larger magnitude aftershocks also occur. Earthquakes may cause deaths, injuries, and extensive property damage, in addition to fires, tsunamis, landslides or avalanches.

What To Do During An Earthquake 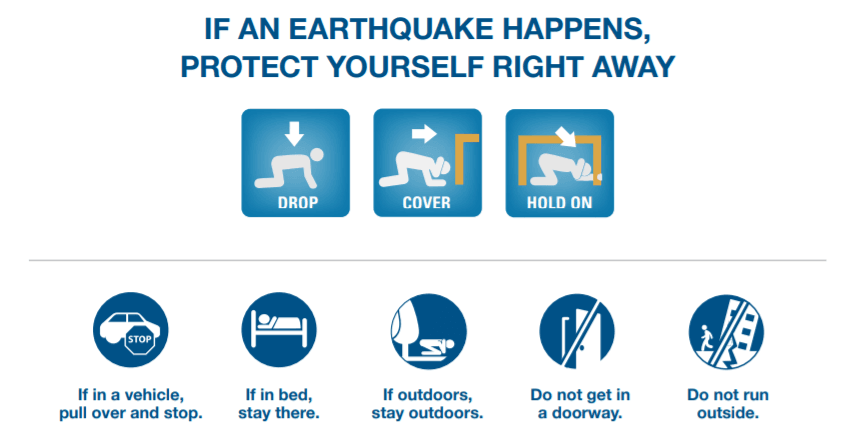 During an earthquake, minimize your movements to a few steps to a nearby safe place. If you are indoors, stay there until the shaking has stopped and you are sure it is safe to exit.

A tsunami is a series of enormous ocean waves caused by earthquakes, underwater landslides, volcanic eruptions, or asteroids. Tsunamis can travel 20–30 miles per hour with waves 10–100 feet high. Tsunamis can cause flooding and create problems with transportation, power, communications, and drinking water. A tsunami can kill or injure people and damage or destroy buildings and infrastructure as waves come in and go out

What To Do During a Tsunami

If you are under a Tsunami Warning:

If you are in a tsunami hazard zone and observe any of the above natural warnings, move to higher ground or inland as soon as it is safe to do so. There may be as little as 10 minutes between the earthquake and tsunami.

2.  DO NOT WAIT! If you are in a tsunami hazard zone, get to high ground as far inland as possible. If evacuating due to a local source tsunami, go by foot if possible. An earthquake may damage roads and bridges and heavy traffic may cause gridlock and limit your access to a safe area. If you are in a boat, go out to sea.

3. Listen to emergency information and alerts.

4. Avoid wading in floodwater and stay away from damaged buildings, roads, and bridges.

Wildfires are unplanned fires that burn in natural areas like forests, grasslands or prairies. These dangerous fires spread quickly and can devastate not only wildfire and natural areas, but also communities. As catastrophic wildfires continue to increase each year in California, make sure to protect yourself and your family – plan, prepare and stay aware.

What To Do During A Wildfire

When immediate evacuation is necessary, follow these steps as soon as possible to get ready to GO!

Flooding is a temporary overflow of water onto land that is normally dry. Floods are the most common natural disaster in the United States. In Humboldt County, flooding most commonly happens in the winter months December - March. However, local coastal flooding happens much more frequently throughout the year. Failing to evacuate flooded areas or entering flood waters can lead to injury or death.

What To Do During A Flood

Depending on the type of flooding:

Severe weather can happen anytime, in any part of the country. Severe weather can include hazardous conditions produced by thunderstorms, including damaging winds, tornadoes, large hail, flooding and flash flooding, and winter storms associated with freezing rain, sleet, snow and strong winds.

What To Do During Severe Weather

When Power Outages are Expected:

During a Power Outage:

Extreme heat is a period of high heat and humidity with temperatures above 90 degrees for at least two to three days. In extreme heat your body works extra hard to maintain a normal temperature, which can lead to death. In fact, extreme heat is responsible for the highest number of annual deaths among all weather-related hazards.

What To Do During Extreme Heat

If you are under an extreme heat warning:

Know the signs of heat-related illnesses and ways to respond.

What is a Landslide?

In a landslide, masses of rock, earth or debris move down a slope. Landslides can be caused by many factors including earthquakes, storms, fire and human modification of land.

What is a Debris/Mud Flow?

Debris and mud flows are rivers of rock, earth and other debris saturated with water. They develop during intense rainfall, runoff, or rapid snowmelt, changing the earth into a flowing river of mud or “slurry.” They can flow rapidly, striking with little or no warning at avalanche speeds (faster than a person can run). They also can travel many miles from their source, growing in size as they pick up trees, boulders, cars and other materials. Debris flows don’t always stay in stream channels and they can flow sideways as well as downhill.

When a wildfire burns a slope, it increases the chance of debris flows for several years. Although some landslides require lengthy rain and saturated slopes, a debris flow can start on a dry slope after only a few minutes of intense rain. “Intense” rain means a burst of rain at a fast rate, about half an inch in an hour. With debris flows, the rate matters more than total rainfall.

What To Do During a Slope Failure

Watch for debris flows and other fast moving landslides that pose threats to life:

In order to keep communities safe, your local energy company may need to turn off power during extreme weather or wildfire conditions. This is called a Public Safety Power Shutoff. Your energy company makes the decision to turn off power by monitoring local fire danger conditions across California and taking into consideration a combination of weather and environmental factors. For more information on the factors used to determine PSPS events, visit www.prepareforpowerdown.com.

What To Do During a PSPS

If a Public Safety Power Shutoff is needed due to extreme weather conditions, you can expect:

Early Warning Notification – Your energy company will aim to send customer alerts before shutting off power.

Safety Inspections – After extreme weather has passed, your energy company will inspect the lines in affected areas before power is safely restored.

Power Restoration – Power outages could last multiple days depending on the severity of the weather and other factors. It is important that you and your family have an emergency preparedness plan in place.

When a PSPS is Expected:

A pandemic is a disease outbreak that spans several countries and affects a large number of people. Pandemics are most often caused by viruses, like Coronavirus Disease 2019 (COVID-19), which can easily spread from person to person.

A new virus, like COVID-19, can emerge from anywhere and quickly spread around the world. It is hard to predict when or where the next new pandemic will emerge.

What To Do During a Pandemic