Grants and other funded projects

Humboldt County Public Works staffs a skilled group of Engineers who assess, design and facilitate larger projects to keep our roads safe and functioning. Due to the scale and/or nature of these projects, our staff searches for funding outside of our Roads General Tax Funds.

Some of the funding sources are:

For information on FEMA,  Opens a New Window.

For information on HBP Project Opens a New Window.

For information on California HSIP Program Opens a New Window.

For information on Federal HSIP Program Opens a New Window.

FLAP Grants - Federal Lands Access Program - Funding from the USDOT, Federal Highway Administration to improve roadways that provide access to, are adjacent to, or are located within Federal lands.

For information on FLAP Grants Opens a New Window.

Department of Fish and Wildlife - Fish Barrier Removal Project - Funding for conservation and restoration of natural fish and wildlife habitats.

These are just an example of some of the funding sources used. For everyday maintenance and repairs, funding comes from your tax dollars. The General Fund just does not have enough money to keep up with the repairs and improvements needed within the County hence the reason all of the funding sources mentioned are so important.

There is no denying that Humboldt County has a homeless problem and recently Humboldt County Roads Division was tasked with having to clean up an encampment on Wymore Road in Arcata. A sizable encampment built over the last few months had become not only an eyesore but an environmental hazard due to the level of trash and biohazards in the area. The Roads Division enlisted the services of a local company that has taken a different approach on how to help manage homeless encampments. On clean up day, Humboldt County Roads representatives had a chance to document the work and talk with John Shelter, owner of New Directions. 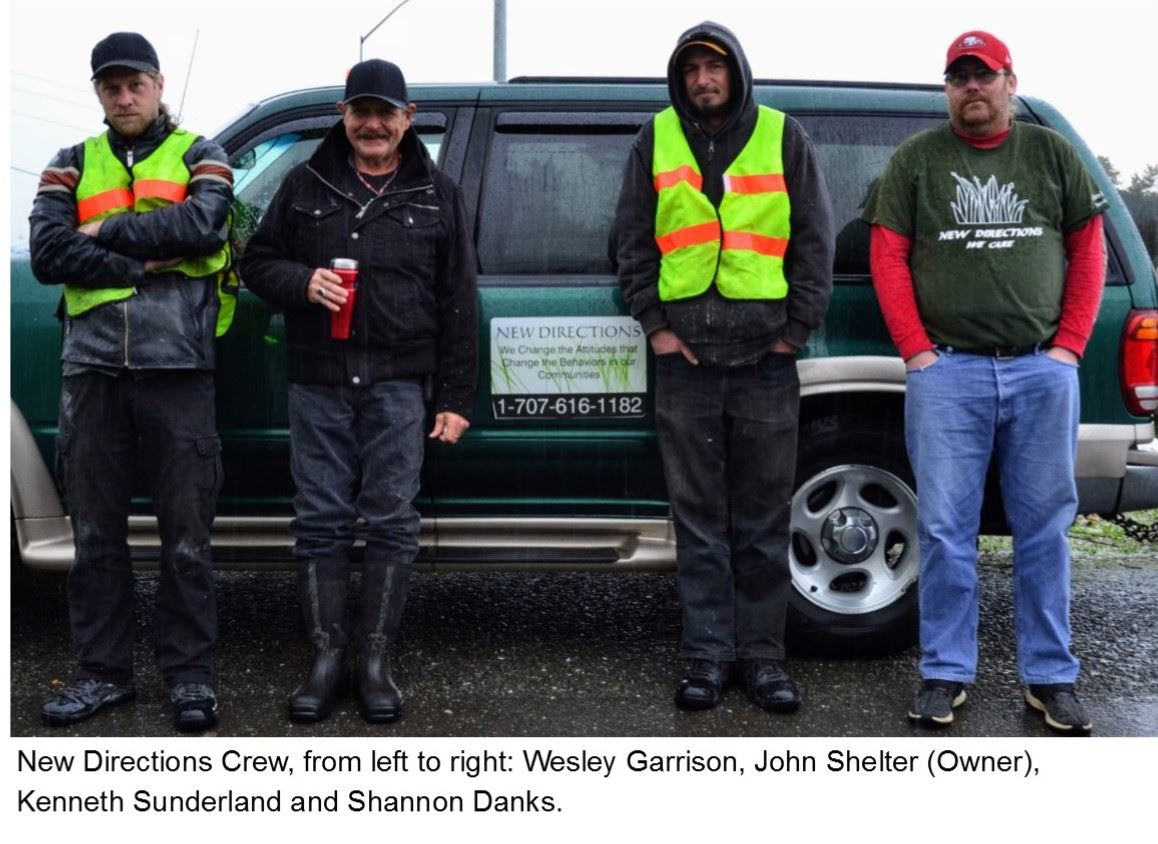 John started New Directions in 2008 working with local business owners and municipalities. New Directions is focused on cleaning up encampments and offering assistance to the homeless in hopes of turning their lives around. John can relate to the homeless population as he was in the same position at one time. After making changes in his situation, John was determined he would direct his life to helping the homeless.  John’s business philosophy is to interact with the homeless in a proactive, positive approach while following all the necessary legal steps.

When a site is designated for cleanup, legal notices are posted 72 hours in advance in front of each encampment and makes personal contact with each individual to earn their trust and to discuss options and assistance available for them.  John encourages them to seek help and even offer to put them through his training program and offer them a job. On the day of the cleanup, John’s crews begin the arduous task of sorting through trash and belongings. Items of value are bagged up and stored up to 3 months for owners to retrieve them. During the days and weeks following a cleanup, New Directions crews will patrol the area and discourage resettlement. John states that he has about a 50% success rate in either transitioning people back to their families or into a sustainable life off the streets.

While we were standing with John, a man rode up on a bicycle and the two began talking. They addressed each other by name and were respectful to each other. The man asked John for another half an hour to finish bagging his stuff, he promised to be done soon. John very politely told him sure. A woman living on Wymore Road had built a sizable campsite and was struggling to get things together. John told her “I understand you want to take everything with you but there is so much junk you just need to get what you can.” John gave her a little more leeway but was firm with her and told her to finish.

A few days later we met with John again on Wymore Road. It had been raining over the weekend and that morning it was on the verge of snowing.  John stated “We got this done just in time. The whole area is flooded now and it would have been impossible to clean out today.” The area has been completely transformed. “What was slated to be possibly a 2 day job was completed in 7 ½ hours thanks to the County bringing in their big dump trucks and loaders,” said John.

John’s approach to help with the homeless situation has caught the attention of other agencies. Humboldt County Roads Division has contracted with New Beginnings to continue working with the homeless in the County. New Beginnings has also been contracted by Caltrans to help clear out the overpasses in Humboldt County and hopes to expand soon to neighboring counties. John envisions sharing his techniques with other groups and people who want to help decrease homelessness.

Brookwood Bridge in Bayside may not be the oldest covered bridge in Humboldt County but it is surely the most iconic. Built in 1967-1968, the bridge's location over Jacoby Creek has been a favorite backdrop for families and couples to take memorable photos for decades.

In 2013, engineers performed an assessment on the bridge. They discovered that the bridge had a beetle infestation in the lower trusses and the pedestrian portion had some rot and did not meet current safety standards. However, the bridge was in good condition and would be less expensive to restore than to replace it with a modern bridge.

In June 2018, the restoration work began. The preferred process decided on was fumigation. This is the first time this process has ever been performed on a covered bridge in California. Following strict guidelines and with oversight by the Humboldt County Department of Agriculture, the California Department of Pesticide Regulation and Vikane, the pesticide manufacturer, the fumigation process, handled by Big Time Pest Control, was a success.

This pictorial shows the restoration progress from July to October 2018. Funding for this project was provided by the Cal Trans Highway Bridge Program.

Click here to learn more Opens a New Window.  about the history and background of the Brookwood Bridge Restoration Project,

Humboldt County received funding through the Department of Fish and Wildlife Fish Barrier Removal Project to restore Dinner Creek to an open drainage to help return Coho Salmon and Steel Head Trout to the watershed. This large scale project not only will help and protect the environment but also stabilizes the roadway crossing the creek. The culvert that had been under the roadway failed due to age and was causing erosion to the roadway above. This project is a win/win for the people and the environment. 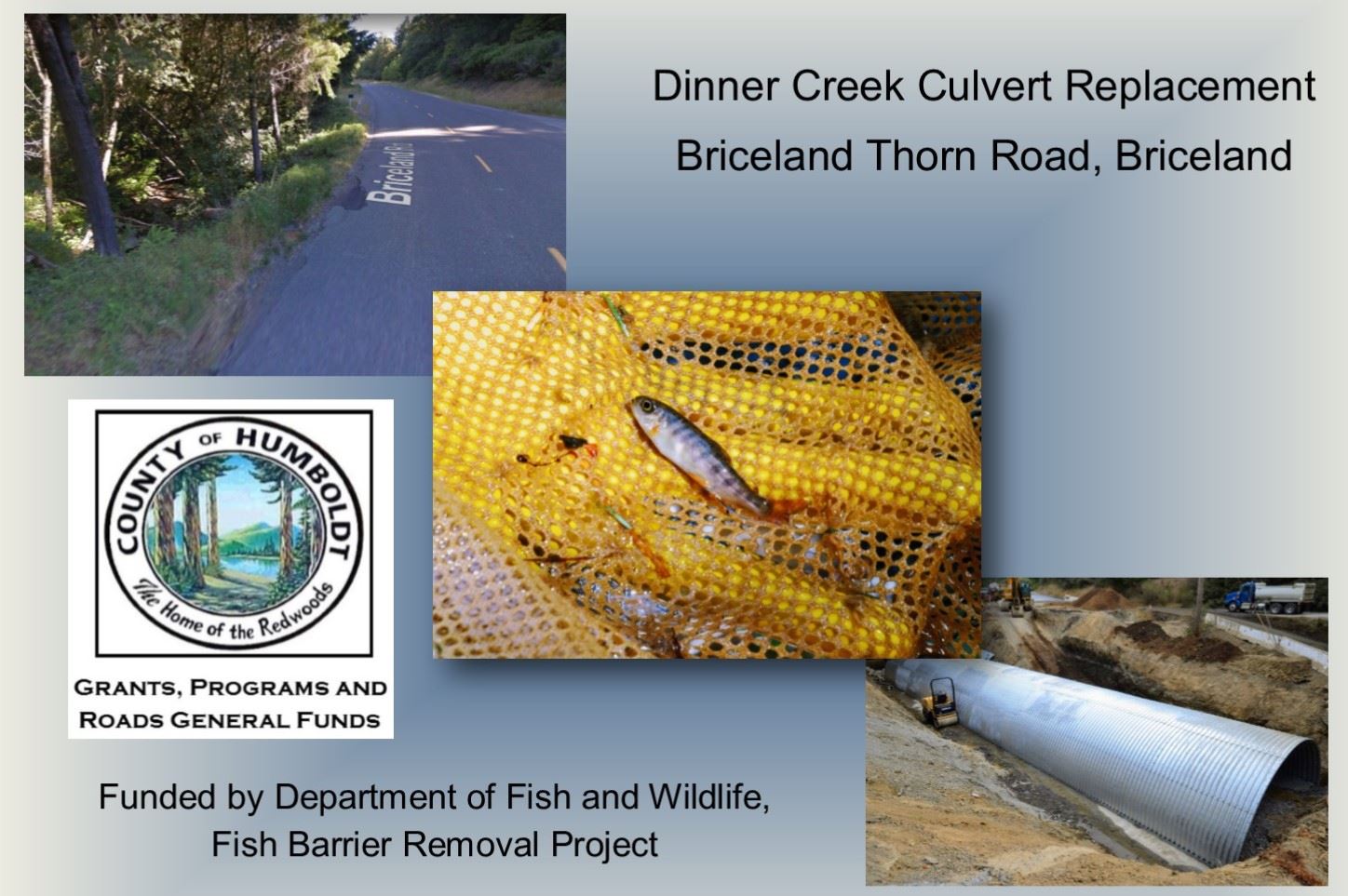 For more information, visit the CA Department of Fish and Wildlife. Opens a New Window.

Pictorial of the culvert replacement on Eel River Drive. The roadway and culvert were storm damaged in winter of 2017. Work began August 26, 2018 and was completed by October 15, 2018. This project was funded by FEMA. 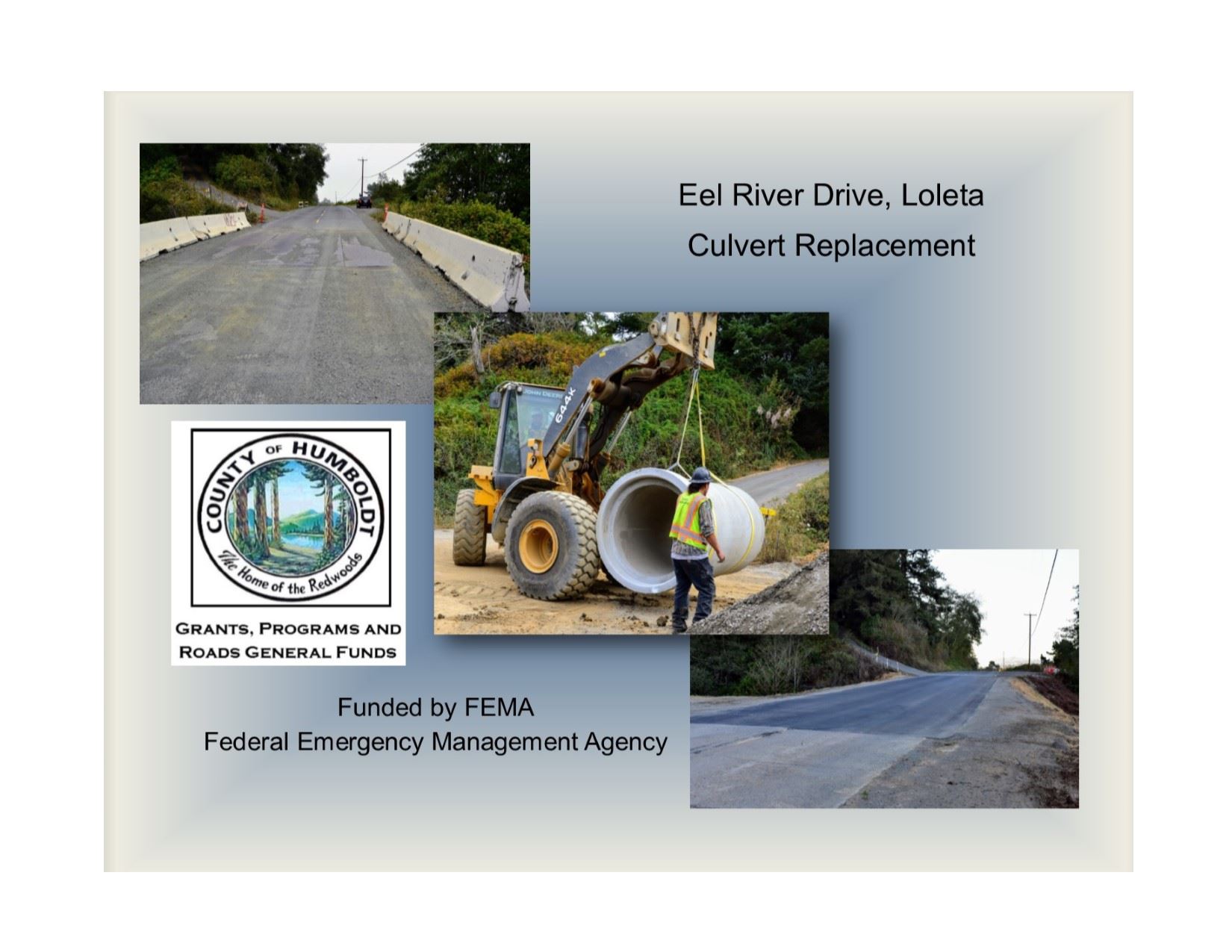